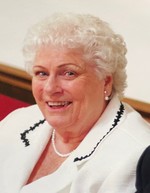 Inez Skipper passed away peacefully on February 2, 2022 at Morada Senior Living Center in Waxahachie. She was born on September 21, 1931 in Dawson, Texas to Cassie Jelean and Homer Perry.

Inez lived in Corsicana until the age of 5, when her and her mom moved to Waxahachie to “The Hill.” She told stories of walking with her friends across the viaduct and going to the three different movie theaters on the square. At one time, they lived in an apartment above the old Trinity Pharmacy and she would tell us stories of watching all the people on the square. As a teenager, she worked at a film store and loved painting the pictures. To this day, her pictures were her prized possession and she would spend hours looking through them.

On August 14, 1948, she married Miles Chester Skipper. They briefly lived in Dallas before moving back to Waxahachie. They moved back to the “The Hill” in 1959 where she resided until January 2021, when she moved into assisted living. She was very proud of her long tenure living on what is commonly known as “The Hill.”

She was preceded in death by her husband, Miles C. Skipper in 2010. Her brother, Joe Perry, and her mother, Cassie Jelean Beasley.

We wish to extend our upmost gratitude to the staff of Morada Senior Living and Bristol Hospice for the wonderful care they gave Mom.

She will be laid to rest at Sardis Cemetery with her immediate family in attendance.