To share your memory on the wall of David Smith, sign in using one of the following options:

In 1966 he married Julia Carolyn Smith, and raised 3 daughters. He made a long and successful career in teaching, coaching, and buying and selling real estate.

Friends and family are welcome to join in a celebration of Dave’s life on Sunday, September 27th anytime between 1-3 PM, at Chapman Park, 1805 Alexander Dr. Waxahachie, Texas.

Memorial contributions may be made to scholarship fund, Waxahachie Ex-Students Association, by mail donation can be mailed to PO BOX 906 Waxahachie 75168 or by visiting the link: https://waxahachieexstudents.org/support-our-association?olsPage=products%2Fclass-of-70-scholarship-donation
Read Less

Receive notifications about information and event scheduling for David

We encourage you to share your most beloved memories of David here, so that the family and other loved ones can always see it. You can upload cherished photographs, or share your favorite stories, and can even comment on those shared by others.

Posted Sep 26, 2020 at 07:47pm
Carolyn I’m so sorry for your loss of Dave !
My Thoughts and prayers are with you and your family ! I know what you’re going through !
May God bless you in your time of sorrow!
Comment Share
Share via:
GW

Posted Sep 25, 2020 at 06:37pm
My sympathies and prayers for Dave’s loved ones. Lots of memories of my Joe and Dave fishing or playing poker. I guess my favorite neighborhood memory is of Stephanie riding her bike while announcing to anyone within ear shot “my dad is Dave Smith the real estate man”
Comment Share
Share via:
MM

Posted Sep 25, 2020 at 06:49am
Our thoughts and prayers are with Carolyn and the family. "Dave, my friend, I hope where you are, you are getting your limit of fish." Dwaine and Mary Maxwell
Comment Share
Share via:
J

Please know that you are all in my thoughts and prayers.

Posted Sep 10, 2020 at 05:53pm
Dearest Carolyn, you are in my prayers, so sorry for your loss. I can only imagine what you are experiencing with the loss of a husband. You and your girls are in my thoughts and prayers. May the Lord be with you at this time of suffering.
Jan Wilkinson 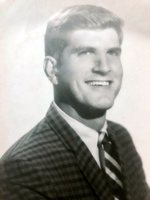