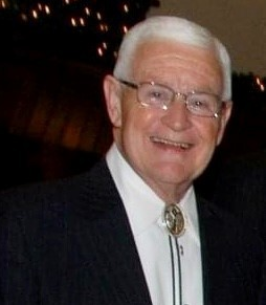 It is with great sadness that we announce the passing of our beloved husband, father, grandfather and precious friend, George Michael “Mike” Ramsey. Mike will be greatly remembered as a beacon of tremendous joy, grace, inclusion and kindness. His incredibly humble, engaging and generous spirit made each and every one he encountered - friend or stranger - feel seen and so special. He made an indelible impression on the hearts of many, especially those in the community of Waxahachie, Texas which he deeply cherished. Known for his signature, impeccable attire in a bolo tie and perfectly shined cowboy boots, he was a highly accomplished and respected businessman where he gave 44 years of service in the title insurance industry and poured countless service hours into his community. But it was his marriage of almost 55 years to his college sweetheart, Bonney, and his two daughters, Angela and Andrea, that gave him the most pride and joy.

Mike was born on December 28, 1944 in Dallas, TX. He was born to George Alston and Mary Gwendolyn “Gwen” Ramsey. His mother, with the help of his dear grandmother, Hallie Belle Moore, anchored his infant upbringing the first few months of his life until his father returned from Naval deployment at the end of WWII. He grew up in the Oak Cliff area of Dallas and graduated from Kimball High School in 1963. He was voted Most Popular by his peers, was a Captain and 2-year letterman in football, and earned All-City and All-Greater Dallas awards. He maintained many lifelong, dear friendships from his early years in Oak Cliff.

He attended Southern Methodist University before transferring to North Texas State University where he obtained a BS degree in Government and History. He met the love of his life, Bonney Gayle Streit, his senior year and they were married June 17, 1967 in Vernon, TX. They welcomed their first daughter, Angela Leigh on February 20, 1970, and their daughter Andrea Dee on May 12, 1972. From 1970-1977, Mike proudly served in the United States Air Force Reserves at Carswell Air Force Base. In 1977, they built their forever home on Main Street in the historic area of Waxahachie, where they raised their family. Their home was an open door to visitors and was typically filled with the activity and laughter of their daughters’ many friends throughout the stages of their lives.

Throughout Mike’s career in the title industry, he held an executive management role for a 17-state agency operation for the nation’s largest land title insurance organization, Chicago Title Insurance Company. He was President of the Texas Land Title Association (TLTA, 1982), President of Title Underwriters of Texas (1978), and Chair of major committees of Texas, Oklahoma and New Mexico Title Associations. He was honored as “Title Man of the Year” in 1973 by the TLTA and retired in December 2010 with 44 years of service.

Mike was highly recognized for his integral service toward the preservation and development of the Waxahachie community he loved so dearly. For WISD, he served as Co-Chair of Operation First Day of School (2010), an organization serving the needs of underprivileged children attending the district, and was honored with the 2012-2013 “Citizen of the Year” Award along with wife, Bonney. For the City of Waxahachie, he served as Vice President of Waxahachie Community Development Corporation and was appointed to serve an unexpired term on the City Council in 2014. He served on the Impact Study Committee, the North Central Texas Council of Government’s Comprehensive Economic Development Strategies Committee, and was appointed Commissioner for Condemnation Hearings for County Court at Law #1 from 2013 until his passing.

Serving the Waxahachie Chamber of Commerce, Mike was Chair of the Economic Development Council from 2010-2016 where he was instrumental in assembling multiple city leaders to drive growth, preservation, and prosperity. He served as Advisor, Board of Directors from 2010 until his passing. He served on the I35/Hwy 287 Design and Beautification Subcommittee, and Co-Chair for the Chamber’s Annual Auction in 2011 with his wife, Bonney. In 2012, they received the Chair’s Special Award and in 2018 Mike received the Mayor’s Special Award and Key to the City of Waxahachie. In 2019, he and Bonney were honored with the prestigious Citizens of the Year award.

Together, Mike and Bonney were integral in the capital development fundraising for the new Baylor Scott & White Medical Center in Waxahachie. They served on the Steering committee for Capital Campaign 2013-2014, as well as the Founders’ Wall in the Replacement Campus. Sponsored by the Association of Fundraising Professional Greater Dallas Chapter, they were honored on National Philanthropy Day in 2013 by the Baylor Health Care System Foundation.

Beyond all of his contributions to his career and community, Mike’s greatest pride and effort was focused on his cherished family. After raising his two daughters, Mike was beyond proud of the blessing of his “Magnificent 7” grandsons! He was unequivocally devoted to their lives and development. As little boys, Mike enjoyed entertaining them throughout their acreage property on Main Street and playing his G-scale model trains from Germany in their home’s beloved “train room” - the boys spent countless hours enjoying this hobby with their “Roro”. He enjoyed attending their many sports practices, games and events and poured his heart into their individual interests and life milestones. As the years progressed, the boys could count on their Roro’s wisdom and guidance. His legacy of devotion to family and community will undoubtedly live on in their hearts and actions.

Service will be held on Saturday May 7 at 11:00 am, Central Presbyterian Church at 402 N. College Street, Waxahachie, TX.

In lieu of flowers, donations may be made in memory of George Michael Ramsey to Central Presbyterian Church in Waxahachie.