To share your memory on the wall of James Esely, sign in using one of the following options:

Affectionately known as “Papa” to his family, Esely’s kind and engaging demeanor suited his service to patients and parishioners and forged many lifetime friendships. He was an avid reader and book collector who amassed an impressive collection of Texana, history and American literature.

In college Esely was president of the Junior Class, the College Players and his classmates elected him Best All-Around Man. He earned a Bachelor’s Degree in Speech and Drama from Oklahoma Baptist University in Shawnee, Okla., a Master of Divinity from Southwestern Baptist Theological Seminary (SWBTS) in Fort Worth and a counseling certification from North Texas State University (now University of North Texas) in Denton.

To supplement his income while attending college, Esely worked as a reporter and sportswriter for the Shawnee Star and the Hughes County Tribune. He was pastor to Pecan Grove Baptist Church in Shawnee, Okla. He then moved with his young family to Bedford, Texas, where he served as pastor to the First Baptist Church. He penned his own sermons, writing on many topics. In nearby Fort Worth, Esely worked with Floyd Craig for the SWBTS Director of Information, Bill Moyers.

In 1968, Esely accepted a position of pastor of Park Forest Baptist Church in Dallas, Texas, where he led the congregation until 1972, when he opened a private practice specializing in individual and family therapy. He was an early advocate of assisting those recovering from substance abuse and worked with one of the first halfway houses in Dallas. He and his family fostered children in SANCII house, a residence for abused and neglected children located in Lancaster, Texas. He dedicated his life to helping others, and he loved his work so much that he never retired. His counseling career spanned more than 50 years.

Esely’s fascination with Texas and Oklahoma history led him to research and write about notorious outlaws and the lawmen who brought them to justice. Esely attended the annual meetings of the Texas Rangers in Waco, Texas and belonged to the Wild West Association of Oklahoma. He made lasting friendships as a member of the Rotary Club of Waxahachie and he served the Boy Scouts of America, Circle 10 as a leader.

Visitation for family and friends will be 6 to 8PM Friday, March 6, 2020 in the chapel of the Boze-Mitchell-McKibbin Funeral Home.

Funeral services are scheduled for 2PM Saturday, March 7, 2020 in the chapel of the Boze-Mitchell-McKibbin Funeral Home. Interment will follow at the Waxahachie City Cemetery. 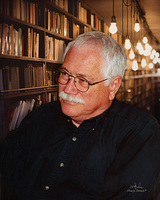