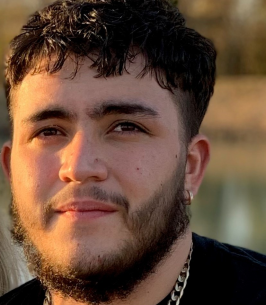 Marcus Ryan Morado of Waxahachie was born March 14, 2002 in Dallas,Texas to
Mario Alberto Morado and Kimberly Beth Morado. Marcus graduated in 2020 from
Red Oak High School. In high school, he obtained a welding certification and upon
graduation he immediately went to work as a welder at Total Steele Fabrication in
Ennis, TX.
The youngest of their two sons, Marcus certainly made an an impact upon all who
knew him from the time he was born it was evident who he was going to be, a
young man of purpose, independence and always a little mischief. The magnitude
of his personality was embodied by the many monikers given to him lovingly by his
family and friends. His family called him “June Bug” as a baby which later evolved
into “Bug” as he grew older. Many of his friends lovingly referenced him as “Fat
Cat” or “Rat” and while every name was vastly different Marcus truly embraced
each one with great pride.
He admired and loved his family and friends tremendously and it showed in
everything he did. He was a perfect blend of each of them . Shadowing his dad
Mario for years he learned a lot about life, sharing a love of the outdoors, working
the land, mastering the art of grilling, making deals, talking a little trash, fast cars,
motorcycles, excitement and adventure. Whether they were stored in the garage
or mounted on the wall Marcus’ success was on display. He didn’t have to brag or
boast he let the trophy’s do the talking.
There was also a side of Marcus that was much like his mother Kim. Never in his
life was there a challenge that he backed down from. He was a fighter through and
through. His strength endured continuous rounds of cancer treatment. No matter
what the challenge or circumstance he held his ground, and demonstrated a true
hero’s strength. Every single day, every single challenge he continued to let his
light shine. His smile never failed to brighten up a room. He bravely rose above
every obstacle he was dealt without fear, never stopping, always seeking joy and
adventure in every day. He recognized the value of good times and good people.
He purposefully chose to embrace the good. Never did he let his suffering show,
nor did he complain. He chose to live a full life on his terms, his way and in his
time. Marcus fiercely loved and protected everyone in his immediate circle,
especially his brother Nicholas.
Nicholas may be the big brother but there was no denying who was running the
show in the household with these two from the very beginning. Marcus never
missed an opportunity to let his big brother know who was really pulling the
strings. Marcus could masterfully influence Nick to do anything he wanted from
homework, games, chores, to manipulating mom and dad. He could read his
brother and he knew how to work him. More evidence to the power Marcus held
over his big brother were the endless pranks that Nick continuously fell folly to
over the years. Sibling shenanigans were very real in the Morado household but so
was their bond and genuine love and respect for one another. A true testament to
brotherly love, each was the other’s confidant, partner in crime and secret keepers
for life.
Marcus also loved the Lord. Giving his life to Christ, Marcus again showed humility
and humanity by sharing the impact that God had in his life, especially in his latter
days. Perhaps, in the hopes that each of us might follow his example always
striving to be better and recognizing we don’t always know the answer but we can
always find our way.
Marcus’ life, while unfairly short, was abundantly meaningful that impacted every
person he encountered. His presence filled every space as he charmed his way
through just about anything all with a glimmer in his eye to enhance his
persuasion. It would not be wrong to share that Marcus Ryan Morado was truly
Hell on Wheels throughout his life and it was a blessing just to be along for the
ride. We can rest assured he is now our guardian angel that we are lucky to know
will be able to keep up with us and steer us toward moments that we too can call
adventures.
Marcus was preceded in death by his grandpa, Larry John Valley. He is survived by
his father Mario Alberto Morado, his mother Kimberly Beth Morado, his brother,
Nicholas Anthony Morado, his sister, Victoria Anne Williams, his niece, Aaliyah
Faith Williams, his granny Jill Kathleen Reed, his nana Tammie Jill Valley, his PoPo
Juan Antonio Morado, his Momo, Maria Antonia Morado and many aunts, uncles,
nieces, nephews and countless friends loved as family.

In lieu of flowers, the family has requested donations be made to the Sarcoma Foundation of America in Marcus' name. https://www.curesarcoma.org/donate/