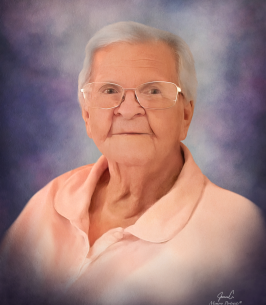 Patsy Walterine Thompson, was born to Henry “Grady” and Ethel Trula Farr Thompson on February 13, 1929 at 0600 AM in Mansfield, Texas. She went to be with her Lord and Savior on September 22, 2022.

Patsy graduated from Waxahachie High School in 1947. She worked as a secretary for the Harbin Motor Company and as a library assistant at Sims Library under Mrs. Hood before attending Texas Wesleyan College in Fort Worth, Texas, where she graduated in 1963 with a Bachelor of Science Degree in Religion with a Minor in English. She then attended Scarritt College for Christian Workers in Nashville, Tennessee and Drew University in Madison, New Jersey. She spent 5 months of orientation at Stoney Point, New York and studies Spanish for 8 months in San Jose, Costa Rica prior to serving as a Missionary in Chihuahua, State of Chihuahua, Mexico.

She received her Teacher’s Certificate from Texas Wesleyan College in 1974 and obtained her Bilingual Certification from TWC in 1982.

She taught as the Head Instructor in the Adult Migrant Education Project in Edinburg, Texas for 4 years, then as an elementary teacher at Edcouch-Elsa in the Rio Grande Valley for 4 years. She then taught as a Remedial Reading and E.S.L Teacher at Red Oak, Texas , where she earned the Teacher of the Year award, for 17 years before her retirement. She taught as a voluntary Spanish teacher at the First Christian church school x 2 years and was a Sunday School Teacher for the Fellowship Class at Ferris Heights United Methodist Church for many years.

She was a member of the Easter Star Waxahachie Chapter 4599 and received 4 Eastern Star training Award Scholar ships. One from the Grand Chapter held in Dallas, TEXAS.

She was a supporter of the Four corner Native American Ministry in Shiprock, New Mexico. She sponsored 6 Korean orphans until they were adopted and she also gave 2 Full Scholarships to two students in Sanatoria Palmore in Chihuahua, Mexico. She received a Life Membership from the Ellis County P.T.A. and from the Texas Life Membership of the Central Texas Conference of the Methodist Church. During her tenure as a missionary, 2 Methodist Church Circles & the Methodist Guild bore her name.