To share your memory on the wall of Sam Henry, sign in using one of the following options:

Sam was a true believer in hard work and he had a passion for serving. He devoted 29 years (and 6 months) of service to the United States Army as Command Sergeant Major (E9) and later retired from the military in 1997. His hard work and dedicated service is the recipient of many merit awards including the Legions of Merit Award under former President Bill Clinton, as well as commendation awards for his tour duties from the President of Japan Self Defense Forces Veterans Association. Sam worked hard maintaining peace and security as Command Sergeant Major in the Korean, Gulf, and Vietnam Wars. In addition, his numerous tour duties in Saudi Arabia, Panama, Korea, Germany and Japan attests to his steadfast dedication to his country.

His spiritual life began at an early age when he accepted Christ as his Savior. In the year of 2000, Sam was united in holy matrimony to Maxine D. Hershel. He worked even harder after his retirement from the military to maintain peace and security for his family. He was a devoted husband, father, grandfather, and great grandfather. He found pleasure spending quality time with family. His love for his children was shown as he taught them how to love and honor God. He went out of his way to help others at any time. Sam was great with his hands. Therefore, he was coined the family’s mechanic. In his leisure time, he truly enjoyed the great outdoors especially fishing with his son and son-in-law. At home, he loved watching old reruns of “Sanford and Sons”, “Good Times”, ”The Jefferson’s”, and westerns. His belly laugh was so contagious to the point that it made everyone around him laugh.

Receive notifications about information and event scheduling for Sam

We encourage you to share your most beloved memories of Sam here, so that the family and other loved ones can always see it. You can upload cherished photographs, or share your favorite stories, and can even comment on those shared by others. 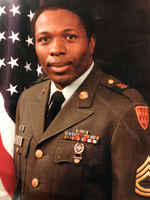