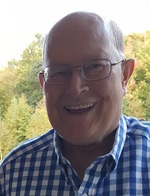 Wayne Homer Phillips was born in Sidney, Arkansas, on February 5, 1943 to Rev. Don and Alleyne Phillips.  He was number 5 out of 9 children.  After graduating from high school in Cooter, Missouri, he moved to St. Louis to attend college.  While there Homer met the love of his life, Trudy Ann Brown.  They were married at the ripe old ages of 19 and 20 and remained soul mates for 58 years.

As the son of a pastor, Homer was raised in the church and was a devoted life-long follower of Christ.  He was fiercely loyal to family and friends, and he was a strong believer in hugs!  He loved being around children and always had quarters in his pocket to pull from behind little ears.  Of all the titles that Homer carried over his lifetime, ‘Pepaw’ was his favorite by far!  He was never so happy as when surrounded by his grandchildren and his great-grandchildren.

In his spare time, Homer liked to tinker outside in the dirt.  He was always collecting seeds and plants and planning the next year’s garden.  It was his pleasure to serve as a Master Gardener for Ellis County for many years.