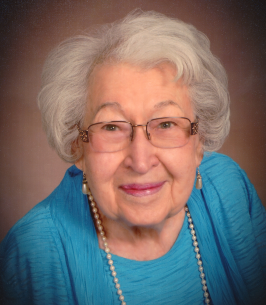 Wilda Naoma (Kimble) Thornton went to her Heavenly home May 29, 2022. She was born to William Hartwell Kimble and Mada Elizabeth (Hill) Kimble on April 23, 1921, on the family farm near Panhandle, Texas; followed by twin siblings Billy Kimble and Bernice (Kimble) Brewer. She graduated from Panhandle High School in 1939. Naoma enrolled in West Texas State Teachers College, in Canyon, Texas, now West Texas A&M University, and graduated with a Bachelor of Arts in 1945. Her first teaching job, after graduation, was in Portales, New Mexico. A year and a half later she moved to Amarillo, Texas, to teach 5th grade. It was in Amarillo that she met the love of her life, Olin Thornton. They were married for 63 years. Together they lived a life of devotion to their family and church in Amarillo for more than 50 years.
The courtship with Olin began after he saw her in a play. They married in the First Baptist Church (FBC) of Amarillo on August 13, 1949. Olin had been required by Naoma to join that church. They made tithing a part of their marriage and, even with struggles, always kept that commitment. They were blessed with two daughters, Jo Beth and Janet. Being a wife and mother to two girls was a life dream come true. Because teaching children was a high calling to her, in 1964, she accepted a position with the church’s kindergarten program and in 1968 became the full-time Preschool Director at FBC Amarillo ministering to countless families and children, a position she held for the next 22 years. Naoma and Olin were also Directors of a Singles Sunday School class for many years. They hosted countless backyard hamburger cookouts for fellowship or outreach. They were faithful to attend Tuesday night church visitation for many years and she was always on the lookout for someone to invite to church and to the Lord.
When grandchildren began to arrive Naoma was crowned with the title she never surrendered and for which she was most proud… GRANDmother. She was Grandmother to all of the family and would allow no verbal variations of that title. Grandmother loved to cook and entertain and having grandkids to feed and care for was heaven on earth. She cooked a million angel biscuits, half of them as the foundation for her famous “eggs-a-la-goldenrod” breakfast. Granddaddy became so addicted to her homemade bread that he would eat no other. She and Granddaddy prayed for the family every morning with sufficient positive results that they got special request from Grandchildren during college finals.
After Granddaddy began to have health problems, she prioritized her life to his care and also continued working for the Lord, her church and keeping up the family. Inspired by her oldest grandchild, she started a special needs Sunday School at FBC Amarillo and then started another one, at the age of 81, when she and Olin moved to Waxahachie in 2001, and joined FBC Waxahachie. They fully committed to their new home and new church. Family attendance at Tuesday night dinner at Grandmother’s house became mandatory after the move to Waxahachie. Grandmother holding hands with Granddaddy as they walked around the neighborhood and the halls of the old Waxahachie hospital to get his exercise became a common sight. Grandmother was proud of living 101 years.
Naoma was preceded in death by her parents, both of her siblings, and her husband, Olin. Left to cherish Grandmother’s memory are her daughters, Jo Beth Grubbs of Waxahachie, Texas and her husband Joe, and Janet Bruce of San Antonio, Texas and her husband Keith. Naoma’s grandchildren are Paige Grubbs of Waxahachie, Amber (Grubbs) Caicedo and husband Juan of Columbia, South Carolina, Austin Grubbs of Dripping Springs, Texas, Preston Bruce and wife Michelle of Houston, Texas, and Jonathan Bruce and wife Hannah of San Antonio, Texas. Surviving great-grandchildren are Benjamin, Lucas, and Owen Caicedo; Caroline and Hailey Bruce; and Adalyn and Grayson Bruce.