To share your memory on the wall of Gerardo Perez Ramirez, sign in using one of the following options:

Lovingly called “Tingui”, Gerardo grew up in Rio Bravo, Tamaulipa (formerly Ciudad Rio Bravo), in northeastern Mexico. As a child, he loved being outdoors, fishing, playing marbles and playing “el Trompo” (spinning top). In his teenage years, he loved boxing/fighting, which is where his fighting spirit originated…and we know his youngest son, Daniel, got that same fighting spirit from his Dad. Gerardo also enjoyed cars, the drums, cooking and grilling outdoors at his Wilmer House. Reading the bible and speaking of GOD to others was important to Gerardo as well. He loved to visit his family and sing along to his favorite songs. Old Westerns and actions movies like John Wick and Christian bands like “Generacion de Jesus”,“el Rapto” and “Stanislao Marino” were some of the things he enjoyed. Problem solving was a skillset Gerardo had, just ask about his “unique tractor seat”.

He was preceded in death by his mother, Armandina Ramirez, and brother, Pedro Perez

Visitation for family and friends will be held from 6-8 PM Sunday, August 2, 2020 in the chapel of Boze-Mitchell-McKibbin Funeral Home. Funeral Service will be Monday August 3, 2020 at 2 PM. Interment will be at Gateway Memorial Park.

We encourage you to share your most beloved memories of Gerardo Perez Ramirez here, so that the family and other loved ones can always see it. You can upload cherished photographs, or share your favorite stories, and can even comment on those shared by others. 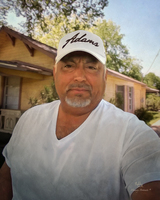