To share your memory on the wall of Ronald Lunt, sign in using one of the following options:

He always wanted to play Army with his big brother Roy. Just shortly after his sister Sharon was born, they moved to Duncanville. The house was unfinished, and Roy and Ronny would play Army for hours on the stairs.

His grandmother lived in Waco so the family would travel there many weekends to spend time with her. Forced to watch Lawrence Welk on Saturday night was grueling entertainment for the three Lunt kids, but this is a memory they shared fondly later in life. In the summers Roy and Ronny would go outside and get wet with the garden hose and then run inside to get directly in front of their Grandmother’s watercooler trying to stay cool in the Texas hot summers with no A/C.

Better known as Ronny when he was growing up. He was smart and funny. His sense of humor was the kind that would make you belly laugh. Same with his personality, you wanted to make sure you were around for the one-liners.

He graduated from Duncanville High School in 1977. After High school he decided his name needed to be more professional, so he shortened it to Ron. He attended UTA for a short period and with the help of a neighbor got an interview at a large bank in downtown Dallas. This started him on his path to his career in the banking industry. Banking came easy to Ron and he worked hard to achieve his goals to have a highly successful career.

During a meeting at a different branch Ron meet the love of his life, Patti Teitelbaum. He knew marrying Patti was the best decision of his life. She has been the most loving and supportive wife during hard times and good times.

Raised in an artistic family Ron did not discover his artistic abilities until later in life. He took a welding class at a community college and began creating metal sculptures for family members. It took off from there when people in the community noticed pieces he had made. His main goal in created the art pieces was strictly to bring joy to others. From there he began collecting nostalgic memorabilia. The collection grew too large, so he decided to open a booth at Old Town Village in Waxahachie. His booth became an instant hit because it catered to men. This gave him an outlet to keep busy after he retired. He loved his time at Old Town Village and made dear friends with many of the vendors.


Ron had a passion for running. He entered many 5K races around the metroplex. On his second race he had ever ran, he got 2nd place (as he called it in the “old man category”).

Ron would be described as a gentle, quiet man. But when he had something to say you better listen because you knew it would be good. We loved Ron because of his giving heart. He constantly gave of his time and resources to help others. If he got a call to help his family anytime during the day or night, he would not hesitate for a second to help. His father & mother-in-law considered him an extension of their own family saying he was their 5th son. When his father-in-law was in bad health Ron was always there to assist with anything that needed to be done and when his own mother passed away, he stepped in to take care of his father’s affairs. He was a loving brother to his siblings, and he deeply loved his wife Patti, his two sons Ryan and Daniel and his family. Ron will be deeply missed and forever remembered by so many.

He is preceded in death by his parents, David and Virginia Lunt; father-in-law, Jerry D. Teitelbaum.

The family would like to give a special thanks to Bristol Hospice Pathways.

In lieu of flowers memorial donations may be made to the Pancreatic Cancer Action Network.

Visitation for family and friends will be held on Monday, February 1, 2021 from 10:00 AM -12:00 PM at the Boze-Mitchell-McKibbin Funeral Home in Waxahachie.

A funeral service will follow the visitation at 12 PM. Interment will be held after at Little Bethel Cemetery in Duncanville, Texas.

To plant a memorial tree in honor of Ronald Lunt, please visit our Heartfelt Sympathies Store.

Receive notifications about information and event scheduling for Ronald

We encourage you to share your most beloved memories of Ronald here, so that the family and other loved ones can always see it. You can upload cherished photographs, or share your favorite stories, and can even comment on those shared by others.

Posted Feb 01, 2021 at 05:32pm
I was a work colleague delighted and fortunate enough to work with and learn from Ron. He was smart professional and a true gentlemen always there to answer a question and bounce an idea. He was so even keel never getting too high or low but on an occasion with a slight raise of voice and choice of words to get his viewpoint across showing his work passion. And then there were his humorous quips out of nowhere to lighten the moment. He will be missed by many.
Comment Share
Share via:
TJ

Posted Feb 01, 2021 at 12:30pm
I had the pleasure of knowing and working with Ron for many years. He was always generous in sharing his knowledge, time and humor with all of us. My sincere condolences to your family. Toni Jensen
Comment Share
Share via:
CW

Posted Jan 29, 2021 at 05:36pm
Hello Lunt Family. My name is Curtis Walker and I was a colleague of Ron's at Bank One/JPMorgan. Reading the wonderful stories and description of Ron's personal life fell right in-line with my work time with him. He was most certainly very generousness with his time, knowledgeable of his business, and quite a funny and genuine guy. I always enjoyed talking with him.

During a team planning offsite, he was asked for 2 truths and a lie so we could all get to know one another. He included, "I've been to prison!" as one of his responses, which everyone knew was one of the lies. As it turns out, he cracked us all up when he told the story of how he had actually "been to prison"... volunteering freely of his time! What a guy.

I was always so pleased to hear how well his treatments were going during the early days of his fight, but I am also happy to know now that he is at peace.

I wish you all the very best during what must be a difficult time while also sharing a virtual smile when I look back on what a solid and warm person Ron was.
Comment Share
Share via:
BM

Posted Jan 29, 2021 at 05:27pm
I worked with Ron for several years. I always enjoyed the conversations we had albeit only once or twice a year. I was encouraged to learn so much more about him from his obituary. He will be missed by all who knew him.
Comment Share
Share via: 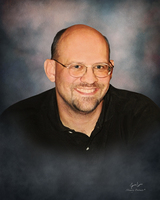